It was my Dad’s birthday recently and I wanted to make him a birthday cake that was manly enough to qualify for a man’s birthday treat. I spent 3 nights researching exactly the right flavour combination and the best recipes to provide what I was looking for.  I’ve always thought there was something brilliant about a great, moist flavoured cake with real frosting.  This was the result – not too sweet, not too rich, decorated with chocolate shavings and pecans.

For the sponge, you will need:

225g butter, left out at room temperature to soften but not melt

For the chocolate buttercream, you will need:

2. Measure out the butter and cream until fluffy, ideally with a hand-held electric mixer.

2. Add in the sugar, and mix again, getting in as much air as you can.

3. Add the eggs in, one by one, mixing after each addition. Once they’ve all been added, whip up until airy and moussey. Add in the coffee and mix again.

4. Fold in the cocoa powder and flour until just mixed in.

5. Split the mixture between the cake pans. I like to weigh it as I go along to make sure they are relatively even.

6. Put in the oven and bake for around 20-25 minutes, or until springy to the touch. Remove from the oven, leave to cool a little and then turn out.

7. While the sponges are baking and cooling (bring mindful of time in the oven) start working on the chocolate buttercream. The first step is to break up the chocolate in a heatproof bowl and place over a saucepan of simmering water. The saucepan should be slightly smaller than the rim of the bowl, the right size to keep it suspended over the water, ensuring the bottom of the bowl doesn’t touch the water, or you’ll risk burning the chocolate. Stir occasionally until it has all melted then take off the heat and allow to cool, stirring every now and then.

8. In the mean time, weigh out the butter and whiz up with the electric beaters (now clean!) until light and fluffy. Add in the icing sugar and beat once more, before combining the cooked melted chocolate and egg yolk.

9. Peel the paper off of the sponges then place one on a cake board or plate, domed top facing down. Use about 1/3 of the buttercream to cover the top of the sponge, spread evenly then top with the second sponge.

10. Spread the remaining buttercream evenly over the top and sides of the cake, making sure there are no spaces where the sponge can be seen.

Serve or give away – perfect with a nice cup of tea or coffee.

I had a project meeting to attend in Edinburgb last week, and one of my colleagues requested that I should supply some sort of baked breakfast (he has requested cherry bakewells for next month so watch this space!). Recently, the company has been providing us with weekly fresh fruit boxes, meaning there is often a glut left at the end of the week. This time, there were a gazillion ripe bananas left over. They were just crying out to be baked into something. Banana bread seemed too obvious, and wouldn’t travel as well, so I set about scratching my head and looking through my books. These were the result (courtesy of Nigella), however, if I had my time again I would have added a cup of chocolate chips to the batter. I contemplated it at the time but decided that Nigella knows best! 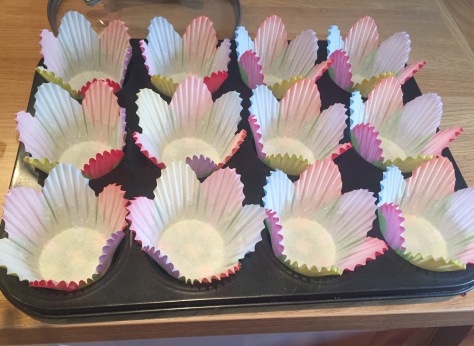 1. Mash the bananas and mix with sugar and oil until thick and creamy.

2. Crack in the eggs and mix again until you have incorporated plenty of air.

3. Add the dry ingredients to the bowl and fold in until just combined.

4. Optional – add in the chocolate chips and gently mix.

This is a great weekend night supper. It doesn’t take that long to cook, but it’s a nice treat to cook for people you love, and to enjoy with a nice glass of red wine. 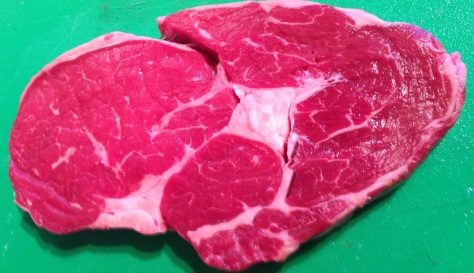 There are a number of cardinal rules for steak:

1. Buy the highest quality beef your budget allows. I like rib eye because it’s marbled with fat which adds more flavour to the steak, but you have to heed how thick it’s been cut when you’re considering the cooking time.

2. Take it out of the fridge at least half an hour before you intend to cook it. To get flavour, you need colour, and to get colour, you need the steak to sear on the outside, not boil.

3. Season. Salt and pepper always, but I think paprika adds an extra something delicious to the mix.

4. Oil the steak on both sides after seasoning, not the pan.

5. Heat the griddle/pan until it’s smoking hot. Cook for max 2 mins each side for a medium steak (depending on the thickness). But be careful not to burn yourself like I did.

6. Rest. It might be a cliché but it’s really important to let the grain relax, preventing a chewy steak. 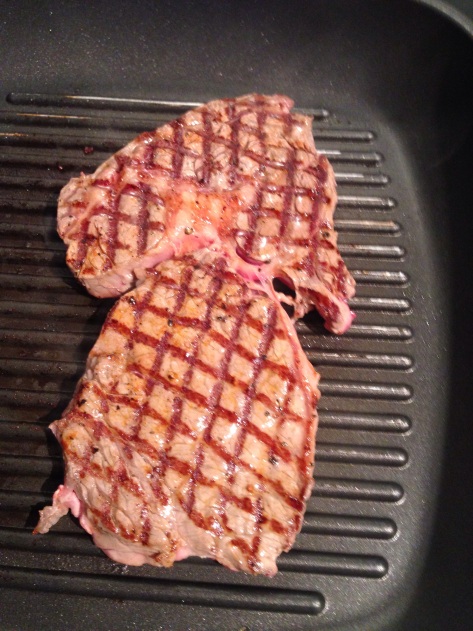 For the chips, you need an oven as hot as you dare, about 200 – 220C should do it. Pour a couple of tablespoons of oil on a tray and pop it on the top shelf of the oven to heat. Cut a couple of large potatoes into narrow wedges and season. Once the oil is hot, chuck them in the tray, carefully toss them around and put in the oven. They should take about 30- 40 minutes to get nice and crisp, so keep an eye on them and turn once when they’re more than halfway ready.

Serve with caramelised onions, mushrooms, cubed and cooked in butter and mustard or ketchup on the side. Also great with roasted peppers!

There are some days when you just have the urge to bake cookies -whether it’s for joy of loading up butter with sugar, vanilla and cinnamon, for the guilty pleasure of licking raw dough off the spoon, or the utterly delightful smell of them baking – nothing can match them.  I recently made a batch of my famous chocolate chunk cookies for a colleague’s birthday (and I’m afraid that recipe is staying a secret for now!) but I knew I had oats and sultanas in the cupboard, so a take on oatmeal raisin it was to be.  I got a decent batch out of this recipe (though not quite the 24 she suggests), though I kept a small amount of the dough back to put in the freezer for emergencies (you know exactly what I mean!).  This isn’t my own creation, but has been adapted from the recipe on Sally’s Baking Addiction, which I found I had to play around with a bit.  they are simple and delicious, but I’ll report back another time as to how well they froze!

1 tsp vanilla bean paste (more on this beautiful ingredient another day – use extract if you don’t have paste, but Sally uses   1tablespoon and assures us that it’s correct)

1 tablespoon golden syrup (Sally uses molasses, but I have a horrendous dislike of molasses)

1. Cream the butter with your electric beater/mixer until soft and fluffy.

3. Add the eggs and mix again until combined.

5. Add flour and bicarb, mix until combined, then add the sultanas/raisins. It’s best to use an electric mixer as the dough will be very dense and sticky by this point.

6. Cover with cling film and chill in the fridge for 30 mins to an hour.

7. Preheat the oven to 170C fan/190C non-fan and prepare baking sheets/trays with silicone parchment or grease-proof paper. 2 trays at a time is probably enough per bake depending on the size of your oven, so this stage can be much more time consuming than making the dough.

8. Roll balls of dough slightly smaller than a golf ball (but it depends how large you want your cookies to be) and then flatten a little so they look more like small hockey pucks – this helps to speed up the baking and make sure they’ll be cooked through. Try to make sure your sultanas are fairly evenly distributed between the cookies.

9. Spread 3 – 4 cookies on each tray and bake for about 10 minutes, or until brown round the edges and cooked through. If the centre is still transparent, they’ll need a few more minutes. Allow to cool (they’ll harden a little) then enjoy! (They should still be chewy on the inside and will keep for around a week in an airtight container.