In the spirit of my post-exam to do list, I’ve read nearly three novels in the last 2 weeks and will be starting 30 Days of Yoga tomorrow evening, as well as having spent a chunk of my weekend both patiently giving time to my family and declurrering my bedside unit and the bottom of my wardrobe. After clearing a bit of space in my freezer last week, I’ve jumped back into trying new recipes. Given I’ll have some new things to share with you, I thought I’d give you a glimpse of what’s to come in the form of a supermarket haul. All of this for £38. 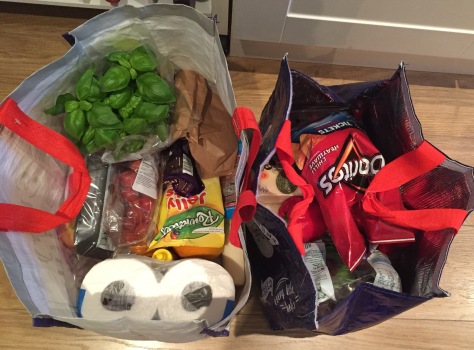 First thing’s first: the junk food. Jelly sweets are something I can’t resist and one of the regular treats I allow myself even with my new healthier lifestyle.  I had to pick up some £1 jelly tots since they were on offer as well as my usual Haribo, but these should last me a couple of weeks! The Doritos were a complete impulse buy since they were kicking about for 96p and I was going to have some with the Saturday night film but ended up bringing them home. Hopefully I’ll be able to resist them for long enough. 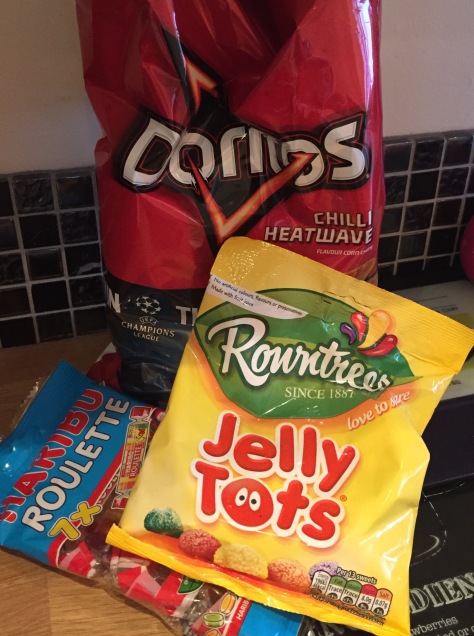 Next, a few things for the chocolate orange cakes I have planned for bonfire night, with an extra oranges for a new supper recipe. You can’t see from the label, but I always always always buy salted butter for baking with, despite recipe directions telling you to use unsalted. Also, I’ve switched back to full fat yoghurt after having experienced the watery nonsense that was 0% fat yoghurt. I’m still convinced that the less you interfere with a natural product the better it must be for you….all things in moderation. 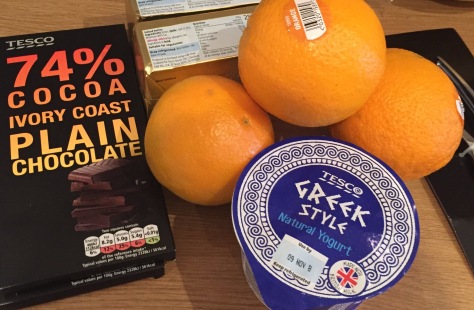 Fruit and veg. I’ve cheated a little here as my Dad gave me a couple of red peppers he’s grown in the greenhouse, but they just look so good! The apples, grapes and melons will be added to the pears and satsumas I have in the fridge to take to work for lunch and healthy snacks (giving me up to 5 of my 5-a-day depending how hungry I am in the afternoon), whilst the leek, onions and tomato are for a cracking lentil and tomato soup I have planned. Watch this space. Oh, and some salad leaves….for you know, salad. 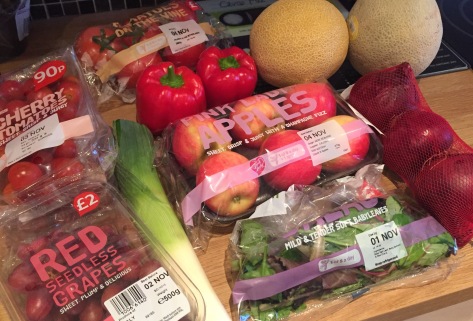 Kitchen cupboard staples. You know how it is – there are some items you always have in the cupboard, whilst there are others you pick up for the first time and hope you’ll like them enough to prevent them hanging around in the cupboard forevermore.

Self-raising flour is something I always make sure I have in plentiful supply just in case I fancy to throw something together in a baking tin, whilst brown rice is a new favourite of mine. I can’t believe I’m saying this but it really is much better than white! It’s nutty, it’s filling, it doesn’t give you so much bloating, and it’s really much easier to cook than basmati, although it does take much longer, there’s none of that messing around with starchy water ir worrying about it going gooood. And I’m sure you’ll know that whole grains are much better for you than white, as well as being easier to burn off because they take so much longer to turn to sugar. Ditto wholewheat spaghetti, although I eat it much more sparingly and it really only goes with a flavoursome vegetable sauce.

I’ve never actually tried sriracha but it seems to be a must for Vietnamese cookery, and if one is to widen one’s culinary horizons, one really ought to do as the Romans do. Now to work out how to make a pho!

Wholewheat cous cous is a new one for me as well, but it didn’t look much darker than regular cous cous so hopefully it won’t be too much of a shock to the system! 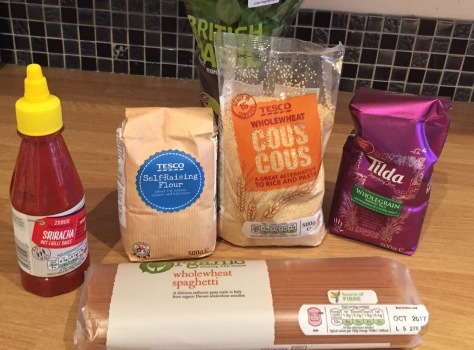 I was really excited to see that Tesco has introduced loose mixed nuts in their shells as well as chestnuts. They had all sorts of ridiculous festive packages at a huge premium as well as a net of them for a few quid, but they were about £1 a kilo cheaper (I may be exaggerating as my maths isn’t great) to scoop them yourself than to buy them in the net. Madness. It’s a common theme though in fruit and veg in supermarkets. Preying on people’s laziness. Anyway the brown bags are much nicer and they handily had a rack of nutcrackers for £2 each dangling nearby. 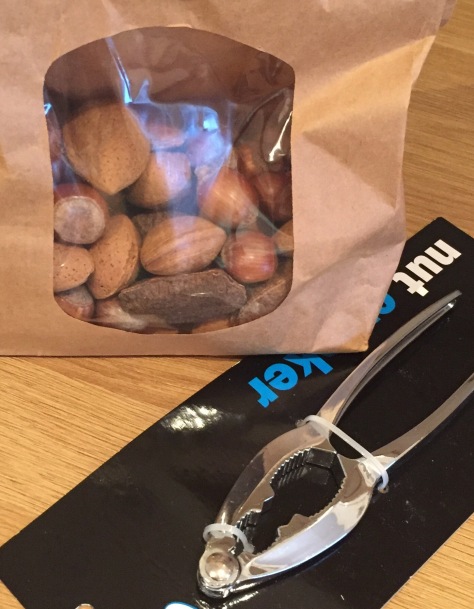 Other than the above, I think I’ve skipped the pot of fresh basil, fresh Parmesan and 4-pack of loo rolls. Fairly self-explanatory. And I love to have fresh herbs on my windowsill…even if I am hopeless at keeping them alive.