This honey and mustard glazed ham looks pretty impressive, right? It’s delicious too, but don’t be fooled: it’s really very easy to make if you have a little time on your hands.

We like to cook our own hams if we can, for two reasons: 1. they always end up much more delicious than the ham you can buy in supermarkets (and even delis) and you can flavour them exactly hoe you want and 2. it’s a much, much cheaper way of giving yourself a good supply of ham. A joint will usually cost between £5 and £10, and you can easily pay £4 for a few decent slices (and the stuff you buy often isn’t even very good).

It’s always a good idea to have one of these babies in the fridge if you have people coming to stay for a few days. Homemade ham makes epic sandwiches, but can also make a relatively simple meal by adding it to pasta with some mushrooms and creme fraiche, or even in thick slices as ham, eggs and chips. It’s simple, but it’s pretty unbeatable.

This one is finished off with a really simple honey and mustard glaze. It’s so much more straightforward than you think but it’s also delicious and well-balanced.

Let us know what you think!

If you liked this recipe, but you prefer your ham a little fruitier, why not try our Mango Glazed Ham or Cranberry Glazed Ham? And if you have leftovers, you can always cut it up into chunks and add it to a delicious pie like this Turkey and Ham Pie.

There’s nothing lovelier to drop off to someone with your presents than something homemade or home baked during the festive season. I usually keep my parents stocked up with mince pies and shortbread for serving up when people come over, but I always like to have a boy of something to take with me when visiting over the festive season. I’ve just spent a lovely couple of days with my fiancé and his family, so I made sure I had a box of mince pies, a gingerbread and a ham to take with me. Primarily, though, my ham recipe is generally wheeled out on Boxing Day to bulk out the leftover turkey for a quick supper and lazy lunches in the days to come.

You will need:
1 gammon, I prefer smoked but I could only find an unsmoked one the right size
1 litre apple juice
1 chicken stock cube
Plenty of water
3 bay leaves (optional)
1 bouquet garni (more optional)
1/3 to 1/2 jar cranberry sauce (bought or homemade)
Cloves

1. Check the suggested cooking time on your gammon’s label. It should give you a time for boiling and baking. Go with the boil time suggested. For this size it was 42 mins – 30 mins per 100g – as I knocked off the extra half hour for the pot – that will be replaced by the baking later on.

2. Unwrap the gammon and check whether there is a papery film wrapped around the joint. This is to help it to keep it’s shape. In my experience, it will remain round enough if you remove it, so carefully lift it up, and snip it off.

3. Set the gammon in a large soup or stock pot. Pour in the apple juice, add the dissolved stock cube and top up with water until the gammon is just covered. Add the bay and bouquet garni. Put the lid on and set to a medium high heat.

4. When the pot hits a steady but not over-zealous boil, start the timer, then leave well alone until the boiling time is up.

5. Carefully remove the ham from the water (I’m not quite sure at what point a gammon becomes a ham but let’s go with when it’s cooked!). Set aside on a chopping board, and preheat the oven to 170c fan.

6. Next, using a paring knife, carefully trim off the rind, making sure to leave a layer of fat to glaze.

7. Using the same knife, score the fat diagonally in both directions so that the scores criss cross.

8. Stud each intersection with a clove. This can be a bit fiddly but it really helps to give the ham a bit more flavour.

9. Get the ham settled on a roasting tray. This one went a little wonky so I just scrunched up a ball of tin foil to shove under the higher end to help it balance. Spoon on the cranberry sauce. I just used the cheap stuff you can find in the supermarket but use whichever kind you like. Mr Brooker has a great recipe for homemade cranberry sauce if you’re feeling so inclined.

10. Put the ham in the oven for 30 minutes until the glaze sets. If any of it melts and drops off, just spoon it back on.

Your finished ham should keep in the fridge for a couple of weeks. You can thinly slice it for sandwiches or salads, or cut thickly and cube for a great tasting addition to a pie or pasta sauce.

Sorry I haven’t been able to blog for awhile; I’ve been taking a quick holiday on the Isle of Skye and the rules were made pretty clear that we should be keeping work and the Internet to the bare minimum! Ever since then, I’ve been trying to get some new recipes up but my WordPress app has not been playing ball.

More on our trip another day….

As we were staying self-catering, we went to the butcher on the morning we left. On Sunday afternoon, I made my mango-glazed ham, which always seems to go down well. I’ve made this twice for Christmas and once as a hostess gift and it’s a much thriftier way of acquiring enough cold meat to see you through. You’ll need to pay attention to the cooking time on the packet, as this will depend on the size and type of ham.

Mango chutney, enough to cover the top of the ham – about 3/4 of a small jar or half a largish jar 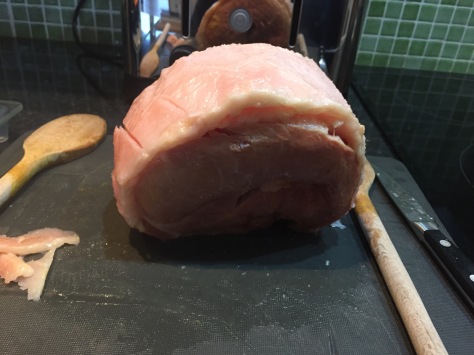 1. Unwrap the ham and remove any film or paper. Check the cooking time suggested. I normally knock off about 10 minutes from the boiling time as it will be baked as well.

2. Put the ham in the pot and add the juice and stock. If there isn’t enough liquid to cover the ham, top it up with water until the gammon is just covered. Add the bouquet garni and bay leaves.

3. Bring to the boil then turn down to a simmer. Check on the pot every now and again to make sure the ham stays covered. After the recommended cooking town, allow to cool for 10 minutes or so then carefully remove the ham.

4. Allow to sit to cool a bit more. Trim off the rind and some of the fat. And preheat the oven to about 190C.

5. Score into the fat, but not all the way through, into a criss cross pattern. Stud each corner of the squares you have made with cloves. Spoon on the mango chutney until coveted. This will require some patience as it will melt and drop off the sides a bit when gravity takes hold – just scoop up and pour back over.

6. Pop on a foil lined tray in the oven and bake for 40 minutes or until the glaze is golden. You might want to take it out half way through to scoop on any chutney that has come off and turn.

Carefully slice when cool and enjoy with chutney, crusty bread and salad! 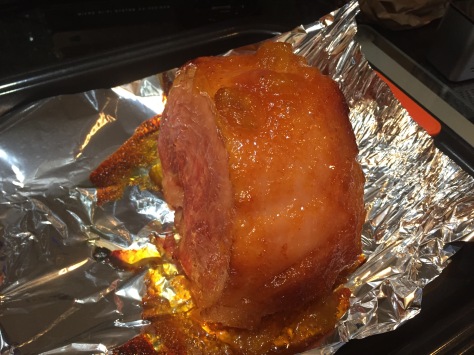