I’m so excited to finally own a couple of Real Techniques brushes. I actually went in for a Seventeen blush brush (which I think was £2.99) for setting my undereyes and found these guys on ‘buy one get one half price’ so I had to (HAD to) invest in the Expert Face Brush and the Blush Brush. Though I am slightly convinced I’ll go back for both of the Core Collections. I won’t tell you how much they cost in case my fiancé is reading this and it loses me some wife points but 25% justifies it! 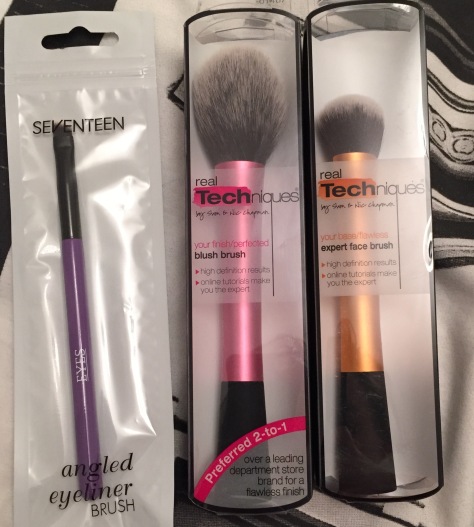 I also picked up this cheap little angled brush from Seventeen, which is soft but firm and has a lovely angled point for precision work.

To be honest, although these look gorgeous, I found them slightly disappointing on their first trip out. They are rusticity soft, but I wonder if they’re too soft. The face brush isn’t quite buffing as hard as I’d like. Saying that, they’re still pretty dry and unused so I’m hopeful that I’ll slowly fall in love. Either way, I wouldn’t have been happy until I bought them.

Thankfully, I still have a use for my trusty old Benefit Foundation Brush (paintbrush style) as it’s perfect for getting between my shadow abs eyebrow (I’m weird, I know, but I feel like adding some base in that gap really defines the edge of my shadow, so it’s blurred out but also contained). 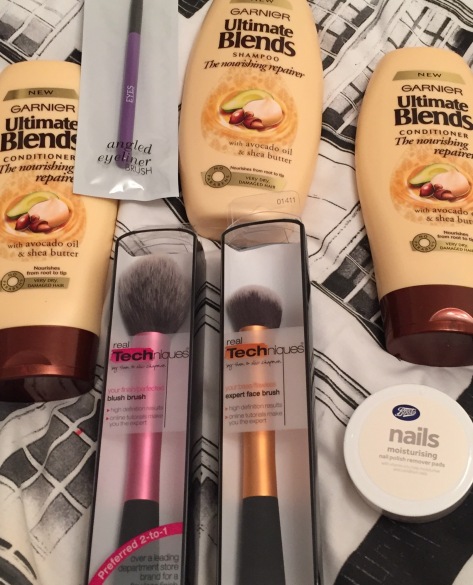 I also picked up some moisturising nail remover pads because I go through them almost as quickly as I go through Haribo Roulettes (in the ducking braved aisle in Tesco – trust me). They’re just so much more convenient than a bottle and cotton pads, although they’re not very good at handling glitter polish.

Finally, I found these guys on 3-for-2 at £2.50 each, and at that price you can’t really say no. I won’t claim to be an expert on hair care, but I’ve been using John Freda’s Frizz Ease for as long as I can remember and found it to be a tiny godsend for my ridiculous mess of hair. However, I’m increasingly finding my hair to be drier than an old tortilla wrap, so I’m going to try something new.
I’ve never used a Garnier shampoo before but I used to be a big fan of their moisturiser just because it smelled so good, and I think they make Fructus, now that I think about it, which Mr Brooker swears by. Anyway, they offer various different formulas which are made up of differing ‘natural’ extracts. For obvious reasons, I opted for the “nourishing repairer” for “very dry, damaged hair” with avocado and shea butter. I can’t pretend I’m not excited about trying this. It smells lovely in the bottle. And my conditioner just ran dry so I can start on one of these bad boys tomorrow. Hurrah!