As you may have realised , I am no expert but have picked up a few things that might be helpful to you. Most of them are mainly common sense but a some were a bit of a revelation to me. I will update this page when I come across new gems of information, which I will no doubt learn from making a pigs ear of things! More importantly, please leave a comment if you have any of your own.

Be patient – A sauce splitting is because you have either heated it too quickly or added things too quickly. The same with lumps, if you take your time you are much less likely to have a problem.

The longer the better – Similar to being patient, the longer you can cook a sauce the stronger the blend of flavours will be. Try and let a sauce simmer as long as possible. It is the best way to make a good sauce a very good one. Keep an eye though.

Thickening – If you want to thicken a sauce, there are a couple of options. The easiest is to just it reduce with heat but this can take an age and you have to keep it moving or there will be sticking/burning issues. The other option is to add flour as a thickening agent. Adding flour (plain or cornflour) straight to the pan will lead to a lumpy mass of disaster so the trick is to mix a paste of a little flour – a little goes a long way – then gradually add a little water and stir to a paste. Add a bit more so it becomes a bit wetter and then pour this into your sauce. Make sure you cook it out for a few minutes to get rid of the raw flour taste and it will take a minute or two to thicken the sauce so don’t be disheartened!

Preparation is key – If you measure things out first then it is just a case of throwing them in. While it might create a bit more washing up it will save you losing track of time while chopping and scorching something. Or in my case, rummaging around in a cupboard trying to find something.

Don’t pour straight from the pot – When adding herbs or seasoning, I always pour things into my (clean) hand first. Not only does this act as a measuring method but also it prevents an unscrewed lid disaster. Also, it prevents condensation getting into pots of herbs and it all getting gummed up and disgusting.

Tried and tasted – Taste whenever you think you should. Don’t miss an opportunity to add more of something because you didn’t try it.

Match your sauce to the dish – If you are cooking a fillet steak the sauce should compliment it and not overpower it. However if you are using something cheap or less flavoursome you might want the sauce to be the focus of the dish.

Experiment – Everyone’s taste is different. If you see a recipe you like always ask “what would make this better for me?” Unless of course you are doing something classic, messing with the classics will upset the food gods!

Fat isn’t the end of the world – While it isn’t overly healthy, a bit of fat is needed in things. It adds flavour and also plays a part in texture. As they say, everything in moderation. A bit of butter as a sauce is nearly finished will give it a healthy gloss.

Waste not want not – You might not be making a sauce that day but you might have some water you have boiled veg in or some juice from some meat. Pour it into a bowl and put it in the fridge. Things will last a few days and will be better than any stock cube.

Cheat ingredients – Everyone has their own cheat ingredients. Marmite is one of my favourites. I often use it as a substitute for salt as it adds a savoury boost giving things a bit extra. Some use smooth peanut butter or a squeeze of honey. HP Sauce is a good one for BBQ Sauce. My aunt swears by a teaspoon of mayonnaise in soup just before serving. Mushroom ketchup is amazing in small quantities, it adds something that you don’t notice what it is but it is good. 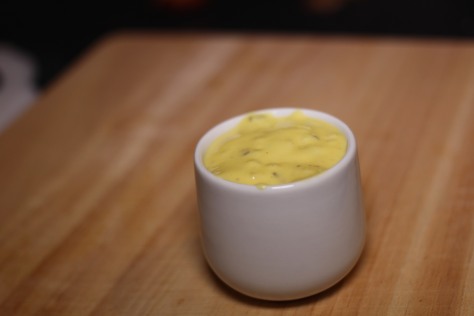 It would be churlish not to use the mayonnaise I made to form the base of another sauce with it! Tartar sauce is not exactly complicated, the biggest thing is having things in the cupboard to knock it up, then balancing the flavours. Essentially, the capers provide the salt and the gherkins provide the sour. The shallot provides a bit of texture  as well as a bit of tartness. The quantities are purely based on how you want it to taste and the texture/consistency you want. The only way to get it right is to try it. It probably wants to be kept on the sour side to complement the fish it is being served with. Egg is sometimes used but generally speaking, I would say that there is enough texture and flavour without needing to put it in, there is also the egg flavour from the yolk in the mayonnaise.

In terms of quantities, I would start with equal measures of everything and then add to taste.

The pickling juice from the gherkins makes an excellent thinner if you need it.

Makes as much as the amount of mayonnaise you use! 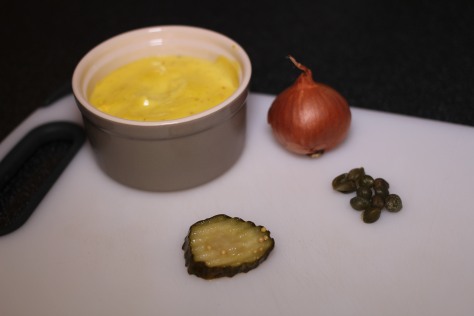 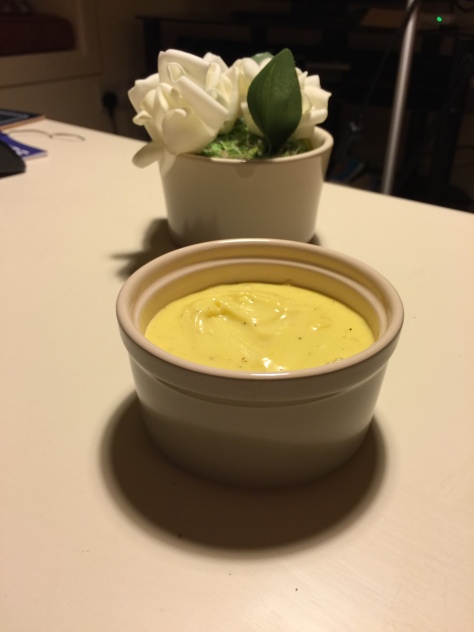 I thought it was time for a classic. Although it could be considered a cooking building block. Mayonnaise is a foundation to so many things like Marie Rose and Tartar Sauce. Don’t worry, I’ll get to those soon It has to be good because it is enormously calorific! While it is so easy just to dollop some Hellmann’s onto things, it has nowhere near the depth of flavour you can expect from home made stuff.

Now in the interests of full disclosure, I have never made mayonnaise before so it was a sharp learning curve! I messed up the first go because I tried to cut down the quantity to one egg’s worth (I’m on a quest to lose weight and don’t want too much of the stuff kicking about). I now have a very tired forearm and a ramekin full for my troubles. I ordered a Kenwood stand mixer and I would imagine doing mayonnaise in one of those would be significantly less tedious! Unfortunately, I don’t know if I will be allowed to open it before Xmas…even if I paid for it.

To make a large ramekin full

300ml of oil I found that olive oil overpowers it and turns it into the olive oil show so mixed 50/50 olive/rape.

1 teaspoon Mustard powder This is key to help the emulsification process and doesn’t really flavour it too heavily.

A squeeze of lemon

Now you can let your forearms relax

Given that mayonnaise is almost an ingredient, there will be a top 10 best uses coming up soon so get your suggestions in guys!

Why write a food website/blog?

Well, I used to write a football blog for the team I support when I graduated from university and was looking for a job. It was relatively successful and getting about 5000 hits a day but as I got busier with real life things I found the level of abuse people gave if you had a slightly different opinion to you was totally irrational and gradually lost enthusiasm for it as the blogosphere got more and more saturated I just let it slip away. Since then I have had a few articles published on sites and fanzines but miss writing. My wonderful fiancée Alyson started writing a blog a few months ago and I am sort of jumping on the bandwagon, it means I can justify spending more money on photography equipment and tech – and of course it is something we can do together when we get married and live together.

Cooking is something I enjoy and while I wouldn’t say I was the world’s best chef – I wouldn’t say I was a chef actually – I seem to be able to produce things that people quite like but I make a solid promise that I will try to avoid anything too pretentious. I am certainly not the sort of person who goes around describing myself as a “foodie” I hate that term. I just want to share good recipes and help make people make good food. I live in a beautiful part of the world but we lack the endless farmer’s markets and delicatessens that you find in bigger towns and cities so don’t worry, you won’t be having to scour the back streets of tuscany for bizarre cheeses or to Mexico for some obscenely rare chilli pepper. Almost everything will be available from supermarkets or relatively basic Delicatessens

Sauces are great. Take some chicken, spring onions and peppers. On their own, they are ok, but it is the sauce that defines them. The same basic ingredients can be transformed from Chinese, to Chilean or anywhere between. They give your food an identity.

Sauces are the key to a great meal, they can raise a cheap cut of meat to be excellent or complement the finest Aberdeen Angus fillet steak. Hell, I know you shouldn’t talk about McDonalds on a food site but I admit it, I have a guilty pleasure, ‘The Big Tasty’, I know it is a burger made of the standard of beef that can barely be considered meat, but I love the sauce – I am also quite partial to Big Mac sauce too. But it just shows what a sauce can do!

The great thing about sauces is that nothing is particularly complex, any cook can produce almost all sauces with a bit of knowhow and the right direction, without requiring elaborate equipment like blast chillers etc.  also things are so easy to customise, it isn’t like a cake that will collapse if you make the tiniest adjustment. It is the intention of The Source of Sauce to help create idiot proof, well balanced recipes that can enhance just about every meal.

The other great thing is that the majority of sauces can just be knocked together with things that will last for a while – vinegars, oils, herbs and spices can sit on the shelf dormant for months ready to jump into your food and transform them.

It is surprising how much people will pay for pots of sauce, pumped with all sorts of flavour enhancers and yet they never taste as good as something you can knock together in a few minutes with the added satisfaction that it is home made and you know what is in it!

I will try to create a system of recipes that will work for everyone whether you operate in millilitres, fluid ounces, cups or gallons to make things easy. All things being equal, we can keep the scales in the cupboard as long as possible and keep washing up to a minimum and that really is a victory.

We won’t just focus on sauce, but also:

And maybe even Soups and things, lets see how things go!

I hope you enjoy reading but more importantly, I would love it if you could comment with suggestions. I would also love to build up a bit of a social media community. If you have any recipe requests let me know too!