I was so excited to try out the baguette year my mum bought for me a couple of weeks ago, but the weekends have been pretty hectic so it’s taken me a little while to get around to it. I initially wanted the terracotta one you can buy from Mason Cash but this one was only £6 and is studded with those little holes on the bottom that will give your bread the pimply appearance you find on supermarket baguettes.

I’ll be honest with you. This was my first attempt at making baguettes, and I’m far from perfecting my bread making skills. Still, it’s a fantastically rewarding endeavour for a Sunday afternoon. And practice makes perfect! Any tips would be welcome!

1. Weigh out the flour in a large bowl. Add in the salt to one side of the bowl and the yeast to the other. This is really important as dumping the salt straight onto the yeast will kill it off. 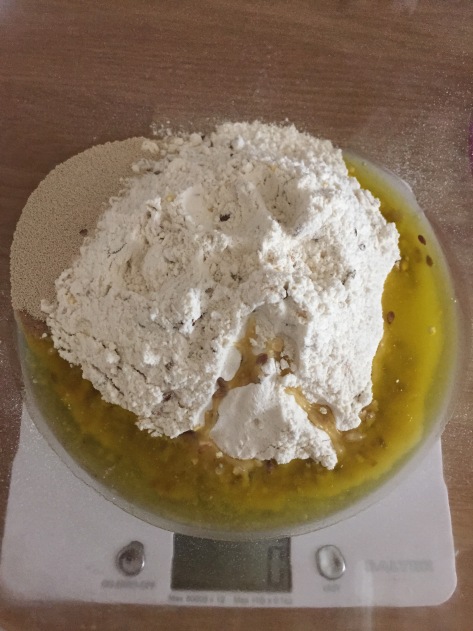 4. Mix it all together and start to work it into a dough. It will start off sticky but bear with it. As soon as the yeast starts to activate (as it warms up) the consistency will develop more structure and become more workable.

5. Drizzle a little oil on a spanning ckean work surface and on your hands (use flour if you think the dough is far to wet, but I do believe in the cheeky little bread baker’s mantra “the wetter the better”) and start to knead.

A word about kneading, though I am no expert. So many people make bread baking too damn complicated. And that gives you stressed out bread. Ok there’s slot of science in it, but your involvement doesn’t need to be the scientific part. As long as you don’t kill off the yeast with the salt or with too hot water, and as long as you don’t leave it in the Arctic to prove (though if you’re careful you can sometimes manage an overnight fridge prove, but more on that another day). Kneading, therefore, just means stretching the dough every possible way. When you bake a cake, you want to mix the flour as little as possible to keep it light and fluffy, right? Well, with bread, you want to give the dough a good workout to give it some muscle. You want smooth elasticity. So you can stretch it apart with both hands, push away and roll back, or chaotically tug it in every direction (children, please) but as long as you’re stretching it you’re moving in the right direction. Energy helps too, so we can burn a couple of extra calories by putting out whole bodies into it.

6. Knead until it becomes a coherent stretchy dough and then keep on going. Some people seem to have a knack to this while i have various degrees of success depending on how long it takes me to get bored. Ideally you want it to form a smooth ball which bounces back when you gentle prod it. I usually get about 3/4 of the way there and have never quite mastered the “window pane” test (where you grab a tiny bit of dough and try to stretch it thinly enough to let the light through without it smelling) but, as James Morton would say, there’s a lot of this work that can be forgiven by letting it prove nice and slow. 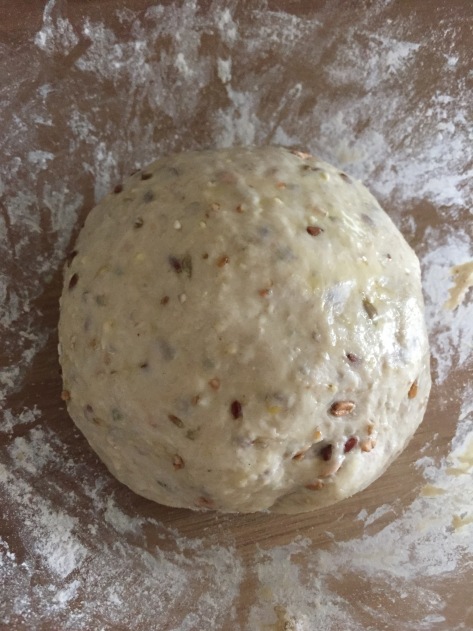 7. As you can see, this guy is not perfectly smooth, but he is dough enough for me. Firm into a tight ball by running your hands down the sides and under, place in the bowl and run over the surface with a small amount of oil to stop it sticking to the cling film. Cling film tightly and leave somewhere that isn’t in a draft. In the winter you might want a little bit of warmth to liven up the yeast, but too much will kill it. A long, slow prove (by the way, proving is just letting the yeast activate,creating carbon dioxide bubbles which let the dough rise) will give you s better flavour and a softer texture. Under kneading and forced proving is nevertheless forgiving – you just end up with a spongey texture rather than a delightful soft bread.

8.  Leave for at least an hour, 2 if you can bear it, but at least until the dough has doubled in size. 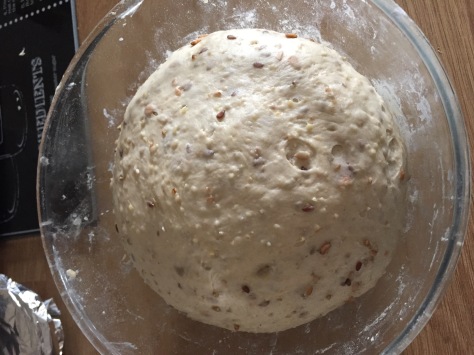 9. Knock it back! Peel off the cling film and punch the dough down. This will give you a satisfying hiss of air and who doesn’t need to punch something every now and again! Split into two relatively equal pieces, stretch and flatten out into a rectangle. Fold the wide edges into the middle, tack onto the other part of the dough by drawing out the edges of the seam and pressing down gently, turn over and roll with both hands, starting in the middle, until the dough sticks are as long and narrow as you’d like. 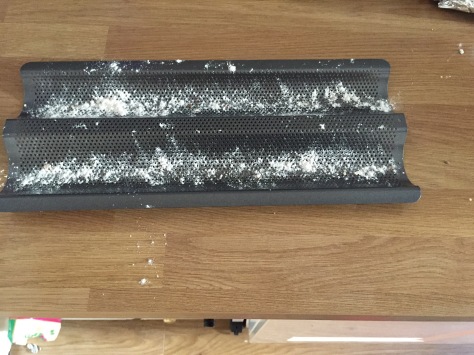 10. Flour the baguette tray and plonk the dough sticks in. As you can see, I made them narrow enough to allow for the second prove.

11. Cover with cling film and leave for 30-45 minutes (less time if it’s really warm, until they look nice and puffy (in below picture they haven’t had their second prove!). When they’re well on their way, preheat the oven to 210C fan.

12.  When ready, and when the oven has come up to temperature, remove the cling film and slash the baguettes three or four times in shallow-angled diagonals, angling the blade (sharp knife or scalpel) inwards about 1cm deep. Be decisive! Put in the top shelf of the oven and add a baking tray of cold water to the bottom shelf. This will create steam which will create lift and give you a really crunchy crust.

13. Bake 20 minutes turn down to 200C and bake for 10 minutes more then remove from the oven. Allow to cool for a little while to help the inside set and to avoid burns, then dig in! Who can resist breaking off the end and slathering it in butter!? If all else fails, your house smell divine!