Please excuse the slow posting. I have had not only a very busy week with work – the sitting room in the house we are building now has a sitting room floor and the porch has a roof (well roof trusses!(since I started writing this, it has now got most of a roof.)). All of my free time has been taken up by my other blog which I am resurrecting from 2010. It is a football (soccer) one, that I had a lot of fun with at the time but life sort of ran away with me. I am using it as a project to learn how to make a proper wordpress.org site so I can help Alyson with hers. And this if I ever get enough views to make it worthwhile! I have also been helping to do some of the cooking for my mother and step-father’s Xmas party. Endlessly tedious! However, I did get the chance to make this tomato sauce, which turned out to be absolutely delicious! 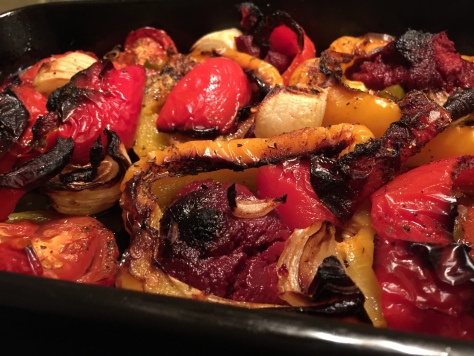 Since then, we decided that we might as well have a joint website so if you want to have a look at the very early stages, it can be found at www.brookersofbluntys.co.uk – we will both keep our wordpress.com pages going though.

On to the recipe!

This isn’t so much of a recipe as a throwing stuff into a pan sort of touch. I have been so busy that there was no meat in the house so I decided it was time to do a tomato sauce. Admittedly, given the stuff I had kicking about dictated the ingredients. It quickly became a bit less tomato based and more of a Mediterranean sort of thing. I will also apologise for the level of photography because I was in a rush and only had my phone with me.

There are so many different ways to produce a great tomato sauce. If you are in a rush you can just fry some diced onions and chuck in a tin of tinned tomatoes with some basil and it will be more than passable with some pasta. While there was a lot of cooking for my recipe, it was pretty low maintenance. Great if you work from home.

A big squeeze of tomato puree

A touch of sugar

A small handful of fresh basil

Season with salt, pepper and a mix of your favourite dried herbs 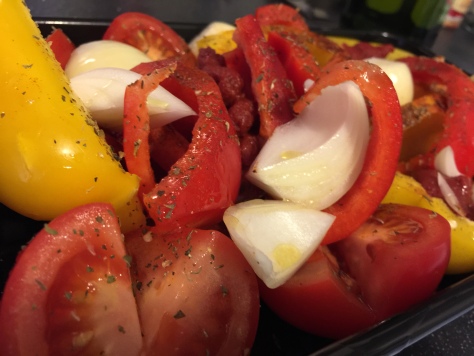 It might be worth peeling the peppers after they have been cooked as the skin doesn’t break down very well if it gets a bit scorched.

A touch of sugar will help to caramelise the tomatoes