It was Bonfire Night/Fireworks Night/Guy Fawkes night last Thursday night here in the UK. If you haven’t heard of it, it’s basically a pretty gruesome celebration of foiling a dastardly plot Guy Fawkes had to blow up the Houses of Parliament in London in 1605. The idea is that we’re supposed to burn his effigy on the bonfire, whilst the fireworks display represents what things would have looked like had his gunpowder plot succeeded. 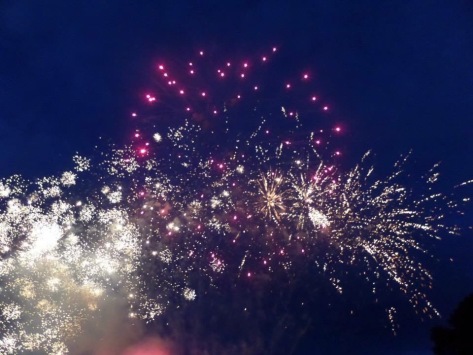 To celebrate, I made these bonfire cupcakes. Dark chocolate orange, nice and seasonal, with a white chocolate buttercream fire, topped by chocolate orange Matchmaker logs. Sadly, because I’m combining a full time job with family commitments, wedding planning, house work and getting in shape for my wedding dress, I didn’t get round to making these until the night itself. And it’s taken me 2 days to properly record the recipe, so sorry about that – I’ll be plenty organised for Christmas!

Anyway the bonus in this delay is that I’ve had some feedback on these guys. For those of you who don’t know, my Mum is pretty much my fiercest critic. Which really sucks when I think I’ve stumbled across something great. But sometimes, every once in awhile, something I bake will prise out a compliment. This here recipe drew out about four positive comments in a row. And a request for an encore. So I would pretty much say the remedial themed decoration, despite being the motivation, is relatively irrelevant now.

Zest of one large orange

Zest of one orange

Yellow and red food colouring – I like the Dr Oetker gels

1. Preheat the oven to 160C fan. Cream up the butter in a large bowl using an electric hand mixer. Add the sugar and cream the two together, until soft and fluffy. 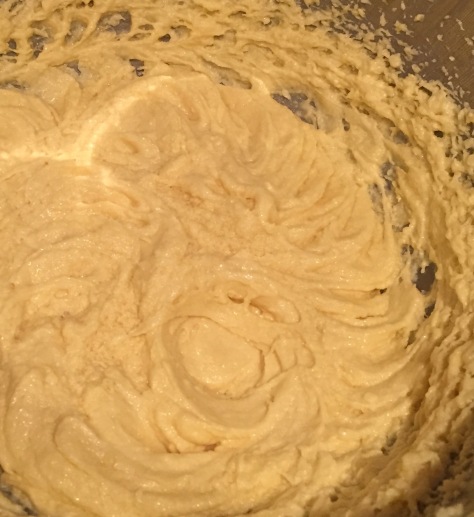 2. Add in the eggs, one at a time, mixing after each addition. Once all the eggs have been added, whip it all up for 5 minutes or so, until light and airy.

3. In a separate bowl, weigh out the cocoa powder. Add in the 4 tablespoons of espresso or hot water and mix into a paste. You can add a little extra if you feel it’s a little dry. Add this to the larger bowl, add the pinch of salt and the yoghurt and fold or mix into batter until well combined.

4. Grate in the zest of the first large orange and mix that in before folding in the flour and baking powder.

5. Set 12 muffin cases into a muffin tin. I used purple foil ones but you can use whatever you’d like, bearing in mind the overall look with the bonfires on top. Divide the mixture evenly between the cases and pop onto the middle shelf of the oven. Bake for around 20 minutes or until the cakes have risen and are springy on top when gently pressed. 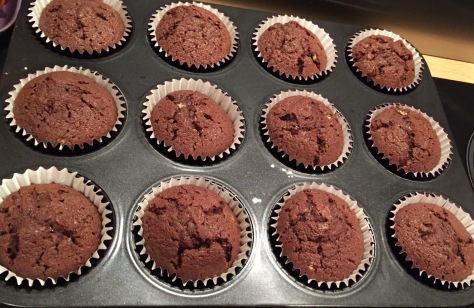 6. Pour the cream into a small saucepan over a medium heat and allow to gently warm through. Break in the chocolate and grate in the orange zest, then stir occasionally until it has all melted together, then remove from the heat, and allow to cool, stirring every now and then. This is your ganache.

7. Meanwhile, whisk together the butter and icing sugar until nice and whipped and creamy. When the ganache has cooled to room temperature, gradually add it to the butter mixture and stir together. Remember that butter that gets too hot will melt. That will split your buttercream. So be careful! Once all the ganache has been added, add in the golden syrup and stir together.

8. Split the icing into three portions, with one portion slightly larger than the others. Add yello food colouring to the largest portion, red to another, and a mixture of the two to the last portion. These will make up your flames. If you are more patient than I am and if you are artistic, you’ll probably manage much more impressive flames. You could even gently swirl the three together and pipe it on. But it was about 11pm on a worknight so I went with the spoon blob technique.

Spoon on some yellow, then some orange on top, fork together, then repeat with the red, using your fork to swirl and spike the icing into a flame effect.

I’m not sure if they sell these in the States, so if not, they’re basically dark chocolate sticks peppered with crunchy orange sugar crystals. If you can’t get these, it would work perfectly well with Mikado, Flakes or Twiglets. Or use your imagination! Anything edible you think would look a bit like firewood which would also go with chocolate cake. 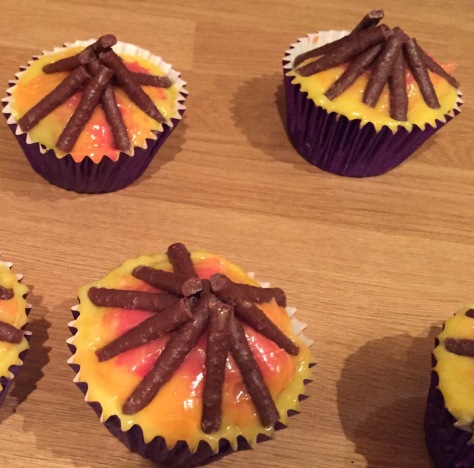 9. Break up the Matchmakers into thirds and place them on the cakes to make a little cartoony campfire shape. I wasn’t sure how far they’d go so I added the minimum to each then tried to evenly distribute what was left.

And there you have them! I might repeat this recipe again but with different decoration and possibly a different topping. Hope you like them – let me know if you have any ideas!